You are here: Home / About

For the new dictionary to be as useful as possible in terms of language technologies, it should be developed from the ground up as an open database able to be computer-processed. That is why the concept of the dictionary is also the concept of a digital database of the Slovene language. Additionally, such approach opens the way for the development of dictionaries for different end users. We are aware of the need of the Slovenian society for language resources which will serve a wide variety of target groups – from schoolchildren to language professionals such as translators and editors, from native speakers of Slovene to those who learn it as a second language. Hence one of the goals of this concept is to provide an answer to the question of what information users expect to get from the dictionary and how to fulfill those expectations.

Building upon the initial proposal, a number of institutions and colleagues are working towards the final dictionary concept within a framework of workgroups. Several targeted surveys have been carried out in order to establish the key features of the new dictionary tailored to the digital environment. With this in mind, the following steps have been taken:

Formation of workgroups for individual subject areas
Preparation of core guidelines for the new dictionary concept (end of February 2015)
Publication of a monograph containing discussions and the concept at the Ljubljana University Press, Faculty of Arts (Autumn 2015)
This web page wishes to provide the public with an overview of the developing process of the concept as well as the dictionary itself and facilitate an open discussion about its theoretical and practical lexicographic foundations. 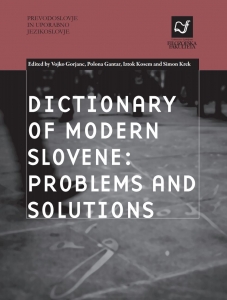